Note: This was originally part of a larger "hooks" piece.  I broke it apart as I'm learning to write for blog length and keep my topics tight.

Now that I've explained why you want to use hooks, here's a quick introduction to how to use them to put together a campaign.  Hooks are used for every kind of story.  There are a few modes of storytelling that modify how hooks are used; but the individual hooks all work the same.

A linear story involves several discrete adventures linked together by and incrementally advancing a larger storyline.  Once the players' characters are strongly hooked into the overarching story, that story itself becomes the hook to the individual sub-stories in the campaign.  A classic epic linear campaign uses this format.

Sometimes the protagonists are hooked into the first story, then hooked into the overarching plot by the first story, in which case the red arrow would point to Story 1, and then the pink arrow above Story 1 would point upward instead of downward.  Frodo sees that the ring is killing Bilbo and volunteers to carry it to the Council of Elrond for him.

A modular story is like a classic episodic TV thriller, where each week, a new situation challenges the protagonists.  You can mix modular stories and linear, overarching stories like TV shows do, with several standalone stories interspersed among stories that are connected together.

Each story stands alone.  That means each requires its own independent hook.  A "pick up" game designed to be played whenever the players have time or can't play their regular games; or a string of pre-published modules can work out this way.

The contemporary term for parallel storylines in a role-playing game is "sandbox" -- but that term is misleading.  "Sandbox" implies you can just do whatever you want; but this is true in any roleplaying game.  Just like in Grand Theft Auto, you can tool around aimlessly all you want in D&D; but the really cool stuff doesn't happen until you hook into a storyline.  So a "sandbox" RPG is really just an RPG with parallel stories.  The PCs are presented with more than one hook, and they can choose which hook to follow.

The image only has two parallel stories; but there is no limit to how many stories you can get going at once.  However, too many parallel stories will just confuse your players.  You might want to stick with two to four parallel stories, and don't make them all linear story chains with separate overarching plots.

You can and should mix all these configurations.  Take a look at the example below. 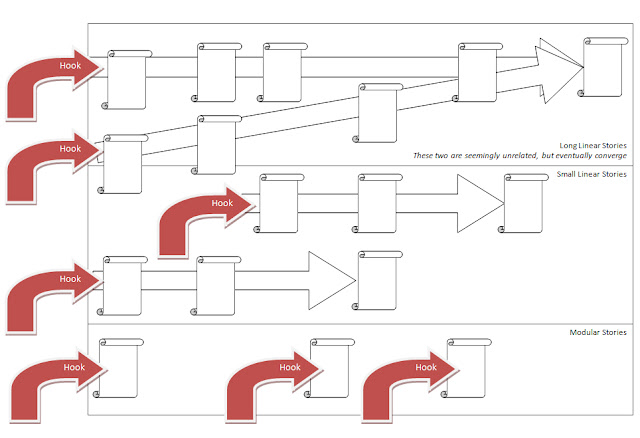 This example gives us 17 stories, each 2-5 sessions long.  If you were to play every other week, this is a campaign that would last two or three years, if not longer.  If this was a D&D game, and you could fit 10 encounters into each story, you would have a campaign that took the characters from level 1-18.  Here's the awesome and inspiring fact about this example:

Seven good hooks generate a campaign where at almost any point in time the players have three or four choices; and each option is something that directly resonates with one or more characters.  You can go through your characters' histories and personalities and connections and come up with just seven solid hooks that draw one of more of them into a story.

In just about every RPG's character creation section, the last step describes those finishing touches, where you give your character a backstory, friends, family, enemies, goals, and motivations.  This is where all the good hook material the GM is going to use comes from.  You may have the coolest concept for a character (usually step 1) with no connection to the story.  That will make that character pretty boring, until a fight breaks out.

GMs have a lot of control over that "Finishing Touches" step of character creation.  Typical GM tricks include writing up a list of questions for the players to answer about their characters.  Sometimes those questions are generic:  Who is your best friend?  Where would you go if you were in trouble?  Describe your character's family.  Is your character in love?  Sometimes those questions come with implications, different for every character, dictating one fact but allowing the player to customize it with a great deal of latitude, so it's not too heavy-handed:  Why did your best friend betray you?  Where did you go the last time you were in trouble with the law?  Why is your mother always getting mad at you?  Why do you want to win your ex back?

GMs also guide these touches by giving the players the game's pitch.  I'll address The Pitch in another post.  In short, the more the players know about the game's story ahead of time, the more they'll be able to work in "Finishing Touches" that can be easily hooked by the sorts of stories you intend to run.  You can even tailor your list of character questions so that the answers give you the appropriate hooks.  You can use a mix of open-ended questions and questions with intentional implications to push players in the direction of your story.  Then even the most "left field" character concepts will wind up hooked in.

And worse comes to worst, you can always turn McDonalds or 18 Strength into a hook, if a player hasn't given you anything you can work with.
Posted by Run a Game at 8:21 AM