Today's post is an infographic on mood in tabletop RPGs!

If you want a more detailed dive into mood in tabletop RPGs than this infographic, click on over to this old article here.  But I'll warn you -- the graphics are ugly.

Here's a much better looking infographic.

GMs, you need to be clear about the mood of your game before the players even make characters.  It determines who the protagonists are, what their ethical considerations will focus on, and how conflicts will resolve.  Superheros just beat up the obvious bad guy.  But in a gothic horror scenario, it may turn out that there's no good guy, and that the PCs were the real bad guy all along.  It determines conflict resolution - in a dark mood game, defeat is common and fun.  In a monster hunter game, defeat is rare and disappointing.

First big news:  I have another guest post up on Critical Hits today.  This one is on skill challenges in 5th edition D&D.  I crunched a lot of numbers to make sure the probabilities worked out for you, then I had to temper those numbers with the details of D&D - class abilities and spells that can give PCs huge advantages in exploration and interaction scenes.  Take a look at the earlier 5e skill work I did here.

Second, I've been making a lot of infographics based around concepts on the blog.  I'm enjoying it, and they get more shares and clicks than detailed blog posts.  Obviously we need a mix of quick and easy graphics and deep dives in blog articles, so I'm going to keep doing both!  Here's another infographic for today!  I plan to do one based around the 5e skill challenges piece, too, if I can figure out how.

Last of all, I read a neat piece over on Sly Flourish quoting Mike Mearls' "we designed for the table, then we designed for theory, now we're designing for the table again" commentary and discussing the actual play podcasts and video series' and their potential impact on the hobby.  I had two thoughts on that.

First, RPG actual play isn't always how people actually play.  I think the videos and podcasts of "actual play" RPG sessions out there are a varying mix of reality and kayfabe.  Some, like the One Shots podcast, aim to show off how the system actually runs.  They're like a cooking show or a product demo. It's like if Rachel Ray GMed an Edge of the Empire game to show you how it's done.  Others, like the Force Grey series are closer to pro wrestling than the Food Network - they're set up for awesome improv between professional (or at least part-time) comedians -- not to actually portray how your Friday night D&D session actually works.  Force Grey is even edited.  Sure, they use the system, but they could be using any RPG system to the same ends, riffing off good and bad die roll results.  You can see a continuum in Chris Perkins alone:  The PAX live Acquisitions Incorporated shows are more theater than D&D (more Ray Mysterio than Rachel Ray); but the AI series is more D&D than theater.  They do away with the elaborate sets and models, and Chris Perkis is running a game a lot closer to how most GMs actually run D&D than his PAX Live performance.  There's definitely a place for each.  In my limited time, I appreciate the edited, entertainment-dense Force Grey shows, even though I'm aware that this is not how my D&D sessions will ever work, and in many ways I don't want them to work that way.  (Example: If you've been reading Run a Game for a while, you probably know why I don't like the trap scene in Episode 5 of Force Grey!)

Relevant articles on Run a Game: 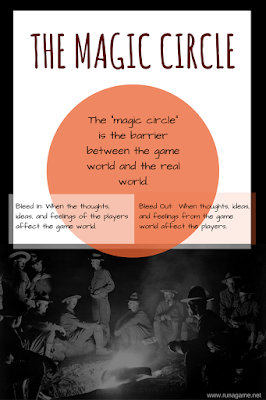 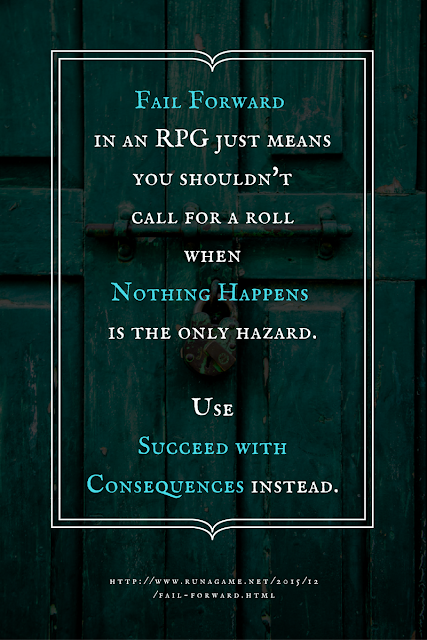 I've been playing with Canva to make infographics for the Run a Game facebook page.  They're much more share-able than a blog post, and people are more likely to read them.
Posted by Run a Game at 7:39 AM No comments: