How to run a horror campaign

Why are RPGs designed for horror like this?  Well there are two major reasons, that I can see:  History and Practicality.

First, the first major horror RPG was the Call of Cthulhu RPG, published by Chaosium in the early days of roleplaying in 1981.  There were many RPGs coming out at the time, but they all looked a lot like D&D.  This game had stats like D&D, and also percentage skills and a Sanity score that was a percentile that kept going down, and which you rolled to see if you lost sanity -- creating an accelerating downward spiral of madness.  Characters could use weapons and spells, and often encountered Lovecraft mythos monsters.  The system was designed to tell a good tragic pulp horror story, like the examples in my sidebar.  Most of the protagonists would die or go insane by the end of a typical story.  The game did this by making monsters deadly and PC skills very likely to fail.  This forced players to choose expedient, but cowardly strategies like burning down a house with their friend inside because a mind-controlling lizard-man was in there (this happened, I did it).  Call of Cthulhu also made typical D&D stuff like monsters and spells cost you Sanity.  An innovative (for the time) system caused you to behave irrationally if you lost too much Sanity at once.  This game was so different from the other games around and turned so many tabletop gaming assumptions on their head that it stuck in gamer culture.  Thus a standard for horror RPGs was established:

1.  A classless, skill-based system
2.  Sanity or some similar system to represent a character's traumatic stress.
3.  A system where PCs had poor chance to succeed at things, forcing them to be cowardly.
4.  A game where a majority of the PCs would be killed or driven mad within about 6-10 encounters with the unnatural (spells, sorcerers, cult rituals, other dimensions, aliens, mythos monsters, etc.). 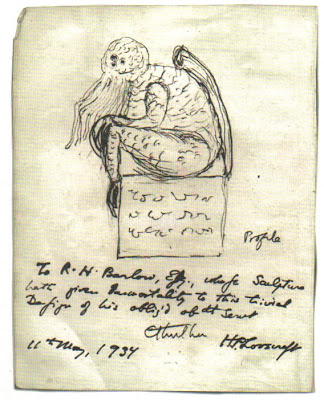 Second, those standards are actually very practical.  The system for Call of Cthulhu is pretty terrible, but there are two practical aspects of the system that really work for the horror genre -- #3 and 4 from my list above.

A system that makes it hard for players to rely on their characters takes away their bravery.  They can't boldly attempt heroic actions and expect to succeed.  Chaosium's percentile die system made it perfectly transparent to players that they sucked.

You watch a bunch of cultists doing a ritual in a barn, opening a gate to commune with the madness of Azathoth directly (and lost Sanity points).  Now they're about to come out, and the sun is rising.  You look at your character sheet and it says...
This makes you feel helpless, which is the core of the horror experience.  The traditional RPG tactic is to hide or fight.  The only option here, it seems, is to bar the barn door and set it on fire.  The system has forced you, in your feelings of fear and helplessness, to take a despicable, cowardly action.  A very typical Lovecraft story outcome!


A system that is tuned to destroy most of the PCs within one adventure is perfect for horror as well.  6-10 encounters with the unnatural fits into an adventure with about 12-20 total encounters.  That's a whole Saturday of gaming (maybe two), or three to six weeks of weeknight sessions.  If you play six weeknight sessions, resolve a story where the protagonists overcome a cult of Azathoth, and two or three "good guy" characters (PCs) don't get killed or driven mad in the process, it's not a fair approximation of a Lovecraft tale. 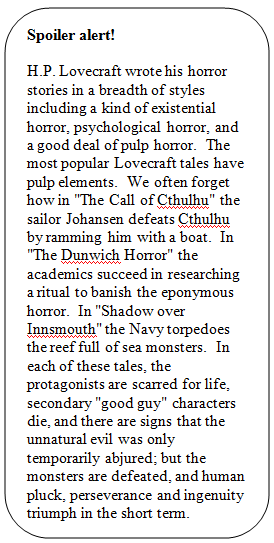 So how do you run a campaign of that?

The Problem of Campaigns


A horror RPG story usually ends in the death or ruin of a significant number of the characters.  Let's say the rate of character ruination is 1 character lost per 6 total encounters.

A horror RPG campaign is several horror RPG stories.  Let's say the campaign has 5 stories, with 18 encounters per story on average, including the subplots and between-adventure stuff.  That's 90 encounters.  Over that campaign, 90/6=15 PCs will be ruined.  That's three per player, on average, if there are 5 players.  That's a lot of turn-over.

Character turn-over erases the connections the player has for his character.  The party starts to lose cohesion.  It feels like a revolving door "we lost the photographer to the sorcerer; but now we have this ex-con.  Oh, the ex-con went insane.  Now we have this mountain climber."  Characters seem to replenish from an infinite pool, but nobody knew them until they popped in and started adventuring with the protagonists.  It's a mess.

The revolving door also screws with hooks:  When all of the original party who were hooked into the plot to start with are dead, why are these newcomers still risking their minds, bodies and souls?

A lower character turnover rate means the GM either has to slow down the action (less frequent scenes with horror elements) which is unacceptable, or the GM has to make the game more pulpy (give the PCs the ability to kick monster ass), which dilutes the feeling of helplessness that causes players to feel real fear.


Here's how Mediaprophet's Ensemble Method (MEM) works!  It uses a literary technique called polyphony.  I prefer ensemble because it refers to the characters as well as the technique, and it's used in television serial drama, which is fairly similar to how I advocate using it an RPG campaign.

A. Make a cast of 2-3 characters per player at the start of the game.  These characters should all be associated with one another somehow -- a London royal society chapter, university anthropology department, local police department, army unit, tabloid newspaper staff, heirs of a mysterious legacy, etc.

C. When you introduce the hook for a story, the entire ensemble is hooked in, but only a sub-group of them acts on it.  So the whole anthropology department is excited about the discovery of a mysterious pyramid on an island in the Bermuda Triangle, but only five of them get on a boat and sail out there to investigate it.

D.  When a character is lost, replace the character out of the ensemble.  Let the players have a little down time as soon as practically possible to accomplish this.  After all, you just had a scary horror scene, and you have to let off tension to build it back up later.  Say they get a telegram that the graduate student on the pyramid expedition was killed by a sea monster.  Now perhaps the department head sends the big game hunter who he corresponds with about African tribes down there to see if he can take care of their sea monster problem.  Compared with creating a character out of the blue, this approach has several advantages:  First, the character is already created, so the player of the lost character doesn't have to wait long to get back into the game.  Second, the character is already established, and his relationship with the other protagonists is already clear.  Third, the group still feels a sense of loss:  Even though the ensemble is a dozen or more characters, it's one character smaller now.  Fourth, the new character knew the lost character and grieves the loss, just like the player probably does.  This leads to a stronger hook for the new character, as opposed to a weak "fill-in" feeling.

F.  Between stories, when the hook for the next story is introduced, allow the players to swap out characters.  Encourage it!  In games with a Sanity stat, this allows one character to "get therapy" in a mental institution while a fresh character goes on adventures, prolonging the life of ensemble members and adding some variety to the game.  The player won't be playing a brand new character either -- though the character is new as an active PC, he's been around for the whole campaign.

G.  Instead of replacing ensemble characters to keep the numbers up, let the cast shrink.  It adds a sense of foreboding to the game.  If the ensemble starts to run out, though, and you want to keep playing, you need to add a new "cohort" of characters.  This will only happen in a very long campaign.  Many TV shows with ensemble casts do this after a while -- actors leave the show, characters are killed or retire, etc. and all of a sudden there are three new characters at the start of the next season.  Because it's a new cohort, they can come in with pre-existing ties.  Say the anthropology department has been decimated by "accident and mental strain" -- so the dean hires three new assistant professors, competing for tenure.  Below is a chart of the ensemble characters of CSI - Crime Scene Investigation from Season 1 through Season 13.  See how they keep switching in and out, and how new characters are added.  If you broke it down by individual scenes and episodes, you could see how characters switch out pretty frequently.

H. Experience points are tricky for horror games in general, and more so for horror campaigns.  They're a way players can decrease their feelings of helplessness, which runs counter to the purpose of horror games.  d20 Call of Cthulhu is dangerous because levels drastically improve characters.  A game like the World of Darkness or FATE has a much slower character improvement curve.  Don't use XP unless you feel you need to; and even then be very stingy with it.  The next question is:  Should only active characters get XP, or should the whole ensemble get XP?  The answer is motivated by pragmatism:  Only active characters (if any), otherwise there's too much bookkeeping and homework.
Posted by Run a Game at 1:28 PM