Last week I gave you a new rule for letting the PCs escape combat.  Today, in Part 2, I'm going to revise the 5e chase rules.  Next week I'll give you examples for all three systems, plus some analysis of the DMG's chase system and advice on how to use it, if you'd rather.

In D&D, the combat rules tend to trump chase scenes.  Chase scenes in D&D (at least in 5th edition) are only really possible once the quarry has broken line of sight because of the power of ranged spells.  At very low levels, even partial casters like Rangers get access to spells that halt enemy movement.  Therefore, chase scenes should begin with the quarry breaking line of sight.  Starting with the quarry out of sight is the main innovation of this system.

If the PCs are the quarry, they have to get to cover before starting the chase scene.  The Escape rules above can handle that for you, if they're already in a fight.  If not, you can just let them tell you how they run away.  Hopefully they won't be foolish enough to stay out in the open for long, in a world with archers and wizards!

If the PCs are the pursuer, this means that the quarry has to start the chase near cover and get concealed before the PCs can react.  Some players may feel like this is railroading.  That's a specious objection:  You're setting up a chase scene, sure; but the players can choose how they want to handle it.  Do they even pursue?  Do they split up?  Do they recruit nearby NPCs to help?  Do they use spells to improve their odds?  They can always ignore the chase if they want.  They can ask around to see if anyone knows the quarry, sketch her likeness and put up wanted posters, or use Locate Person and find her later.  Outside of a city, they can let the quarry run, but try to follow his tracks, or enlist the aid of forest creatures, or use a trained hunting dog to help follow his trail.  Spells and skill checks can handle these situations.  The key here is that the GM needs to be prepared for both "when the players catch the quarry" and "when the quarry escapes."

These rules are "player-facing."  That means that the GM doesn't roll any dice.  It also means they're asymmetrical, which most players will appreciate, since it makes things more exciting for them and puts all the control over what happens in their decisions and the results of their dice.


When do you want to use these?

Pursuit:  When a monster flees combat, typically the PCs will either let it go or hunt it down in combat rounds and kill it.  The third option is for when an important villain tries to flee, and you think it would be fun to run a chase scene where the PCs might or might not capture the villain.  But pursuit scenes are even more likely to show up outside of combat when the PCs want to chase a thief, spy, assassin, or fugitive.

Evasion:  When the PCs flee combat, you might choose to invoke the Evasion rules below to keep the tension up or because the monsters they were fighting are not willing to let them get away.  But it has more uses than that.  If the PCs fail a Stealth check when sneaking past enemies who might give chase, you can start an Evasion scene instead of going straight to combat.  When the PCs escape prison or talk their way into trouble, you can use the evasion system.  And if the PCs get attacked by opponents they don't want to kill (such as town guards or knights who have the wrong idea), they may find it more ethical to run than to open up with fireballs. 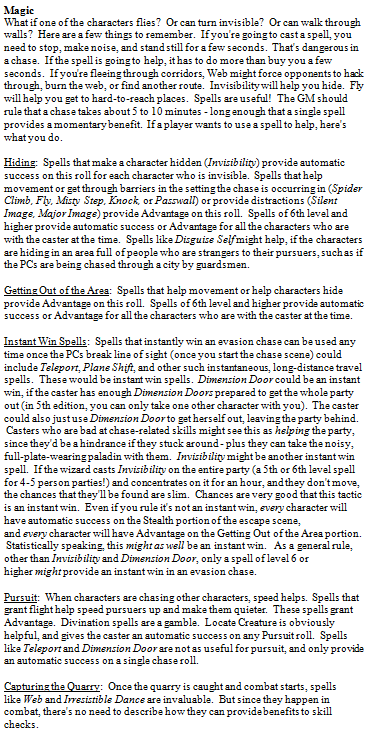 Relative Speed
Movement speed is not as big a factor in a chase after line of sight has been broken as raw athletic ability.  The quarry will use rough terrain to try to break line of sight or cause their pursuers to slip up.  This means a lot of climbing, jumping, pushing through, turning on a dime, and scrambling about.  If you want to factor movement speed into the system, you can use modifiers based on relative speed:  A character whose speed is higher than the highest of the pursuers gains Advantage on their chase rolls to catch their quarry - nobody can outrun them!  A character whose speed is lower than the lowest speed of their pursuers gets Disadvantage on chase rolls to evade their pursuers - everybody is faster than them!  Using this optional modifier, a party of humans will have a very easy time catching a single fleeing halfling, but mixed speed parties chasing mixed speed parties probably won't have a lot of modifiers.

Numbers: Small Groups Get Away Easier
It's easier to get away if there aren't a lot of you trying to slip the net.  Groups of quarry larger than 3 have -1 to their chase rolls for every additional character in their group.  This gives the PCs incentive to split up early, which adds to the tension.

Numbers:  Search Party
It's easier to catch your quarry if you have a lot of people helping.  If the PCs are the pursuers, and they have the opportunity to get NPCs to help catch their foes, have one PC take the lead coordinating them.  That PC makes a Persuasion (to get the NPCs to help, if they need to be recruited) or Investigation (to give them useful orders, if they're already loyal to the PCs) check.  If they get a 10-14, they have recruited or coordinated one of the available helpers, and can claim a one re-roll during the chase.  If they get 15-19, they have recruited or coordinated three of the available helpers (if possible), and can claim a two re-rolls during the chase.  If they got a 20+ they have recruited or coordinated all of the available helpers, and can claim three re-rolls during the chase.  A re-roll lets them roll a failed chase roll again and take the new result.  The leader chooses when the re-rolls are used, and who gets to use them.

The NPCs don't make chase rolls themselves, and don't count toward relative speed modifiers (above) if you're also using that rule.  If combat breaks out, leave the NPCs out.  They're far away doing something useful like running a screen, keeping the quarry from slipping out the back, or checking a side passage.

First, narrate how their quarry ducks and weaves through tight corridors, dark halls, undergrowth, crowds, fog, or twisting alleyways.  The chase isn't interesting in D&D until the enemy breaks line of sight.

The PCs have a choice.  Do they split up to try to corner the quarry, or stick together and try to catch up?

If they stick together, have them all make an Athletics or Perception check, DC 13+P, to run flat out or try to keep track of their quarry.


If they split up, they're separated into two groups.  The goal is usually to have one group head off the enemy.

Have the half coming up behind (the hammer) make a check of Athletics or Intimidation (player's choice) at DC 13+P.


The other half try to cut the quarry off (they're the anvil).  Have the "anvil" PCs make a check of Stealth or Perception (player's choice) at DC 13+P.


If both succeed, the enemy is caught.  Start combat with the two groups that have caught the quarry present.  The PCs have the quarry cornered or surrounded - the PCs have all the exits blocked.  Decide on terrain that suits a situation where the PCs have cornered their foe.  Roll initiative.

Note:  If the PCs are separated from other PCs (from splitting up before), roll 1d6 in secret.  That's how many rounds have to pass before the other PCs - hearing the commotion - arrive to help.

If either group fails (if the anvil is too late or the quarry has given the hammer the slip), the enemy has got away.  Return to Step 2.  Only now they're split into two groups!  They get three tries to catch their quarry.  If they fail at step 2 three times, their quarry gets away.

In evasion, the PCs are the quarry, being pursued by villains.

Next, they have to give their pursuers the slip.  The group has a choice:  Stick together or split up?

If they stick together, have them all roll Stealth, DC 8+P.

If they split up, have them all roll Stealth, DC 8+P.  This potentially splits them into two groups.  Run the two groups separately.

Characters who lost their pursuers in Step 2 can now try to sneak out of the area.  Let each one contribute a useful skill.  Most skills can be useful here.  They have to succeed at a DC 8+P check using this skill.

Characters who were headed off by their pursuers in Step 2 are now running for it!  They have a choice:  Run or turn and fight.

If they turn and fight, set up combat and have everyone roll initiative.  The PCs start at the farthest point away from their enemies possible, but only up to 60' away at most, while still being in line of sight.

Otherwise, they can stay together or rout ("every man for himself!").

If they stay together, have them all roll Athletics, DC 13+P.

Navigation
This post is part of a trilogy!  Here are links to the other posts.