Today, I'm going to help you with one of the most common RPG mechanics:  Giving clues and adjudicating successful Perception checks.

When I started running a GUMSHOE system game, I discovered something universally valuable in all the RPGs I run:  Facts are not Clues.  Clues are more fun than facts, because clues leave some inference to the player.

GUMSHOE, an RPG system for investigative games, has a simple innovation:  Characters can never fail to find a core clue.  A core clue is a clue that moves the characters closer to solving the mystery they're investigating.  Within the first few hours running GUMSHOE, I learned to stop giving out facts, and start giving out clues.

Clues are facts, but facts are not clues.

Bear with me here!  A fact is a true piece of evidence or information.  A clue is a fact that hints at a more important fact.

Clues are great, not just because they add a little challenge to your game, but mainly because they give the player a chance to think about the world their character inhabits.  Even the most obvious clues shift some of the work of "rendering the environment" from the GM to the player.

Not everyone is familiar with GUMSHOE, so let's look to D&D for examples.  D&D has a Perception skill (like nearly every RPG!).  Let's say your game involves a trap, and because you read my long-form article about traps in D&D, you don't want it to be a "gotcha" trap.  Here's a good way and a bad way to handle that:

Bad:  "You notice a pressure plate to a trap in this 5' square."  This is not a clue.  The GM just gave away the most important piece of information.

Here's what happens inside the brains of the people involved:

Mediocre:  "You notice this tile is a pressure plate."  OK, better.  This is a clue; but still not a good clue.  Obviously a pressure plate goes to something bad.  Maybe it's a trap.  Maybe an alarm.  Maybe a switch for a shifting wall.  But the GM is explaining the tile's function, not giving a clue about it.  The only inference the player has to make is "what is the pressure plate's function?"

Here's what happens inside the brains of the people involved:

I like this a little better, because the player has to use their imagination to guess what the pressure plate might do.

Good:  "You notice that this floor tile has no mortar around its edges."  This is a clue.  It's a pretty obvious clue, but it's still a clue.

Here's what happens inside the brains of the people involved.

Here we have two fairly easy steps, but it compels the player to use literally twice as much imagination.  First the player imagines reasons why the tile has no mortar.  Is it a secret passage?  A hidden pit trap?  A mimic?  A poorly-crafted illusion?  A hidden treasure cache?  A pressure plate? Just a coincidence?  It seems most likely it's a pressure plate; so the next step is imagining what it might do, as above.  Trap? Alarm? Switch?


What if the player decided that the floor tile was a trap door that led to either a pit trap, secret passage, or treasure cache, and decided to smash it?  This player has less information than the player in the "bad" and "mediocre" examples, so it seems like they're getting cheated!

Yes, they're getting less information.  No, they're not being cheated.  In fact, as you will see, you're cheating the player more if you give them all the information.

But first, let's talk about what to do if the player is uncertain.  Players know they can continue to investigate.  When they do, the GM can give them the next clue in the chain of inference toward the correct conclusion.  Here's what happens if the player reverts to using system (game frame, see the frame analysis in Gary Allen Fine's Shared Fantasy: Role Playing Games as Social Worlds) to investigate:

Player: "I want to examine the tile.  Can I see whether it's a lid or trap door or whatever?"
GM: "Sure.  Give me an Investigation check." (in GUMSHOE, the GM would call for an investigative ability spend)
Player succeeds (or, in GUMSHOE, the player spends an investigative ability point)
GM:  "Looks like it's some sort of pressure plate."
Player:  "Ah!  Probably a trap, guys."

System cuts out some of the imagination work of the player, shortening the chain of inference:


But that might be OK, if the player is really stumped.

Investigating on the diagetic level, in the game world frame, only embellishes the chain of inference:

This is the ideal, for a lot of players and GMs.

The longer and more detailed the chain of inference, the more the players are rendering the game world in their heads.

By lengthening the chain of inference, it seems like you're cheating a player out of hard-earned success.  I argue it's just the opposite.  Let's look at the trade-offs between a long chain of inference and skipping straight to the important information.

First, let's look at what the player gains in the "bad" example.  This GM doesn't require any inference from the player:
The player gains a clear, unambiguous piece of valuable information that may save the party a lot of pain and suffering.  There's no chance they could misinterpret the information.

Next, let's look at what the player gains in the "good" example.  This GM requires two inferences from the player:

In addition, the player spends a little more time thinking in the game world frame, as their character, about the world around them.  Their imagination is stimulated, and they gain more character immersion.  If the player is unsure and has to investigate further, they might choose to do so without system, gaining even more world detail to stimulate their imagination; and they will gain more character immersion.

They also gain the satisfaction of correctly solving a small puzzle, which generates task immersion (being absorbed in an activity).  Even though it's not incredibly detailed or challenging, they have determined that no mortar means that the tile is probably a pressure plate.  And then the player gets the satisfaction of solving the second puzzle in the chain of inference:  If there is a pressure plate, it probably activates a trap.

Next, let's look at what the player is "cheated out of" with the "good" example.
If the GM doesn't come right out and say it, the player has a chance of failing to realize that this is a trap.  If the player is unsure, it's not a problem:  They can investigate further.  The only danger is if the player gets cocky.

"Oh, this is probably a secret stairway!  I bash it open!"

But if you're an experienced GM, you can employ the old standby...  "Are you sure you want to do that?" 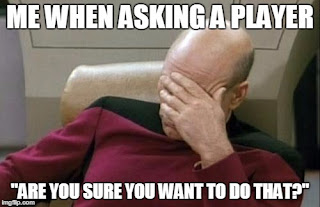 If the player persists, well...  sometimes you screw up.  So yes, the player does lose something when you use clues with a good chain of inference.

Finally, let's look at what the player is "cheated out of" with the "bad" example.

If the GM makes all the inferences for the player, the player is cheated out of the feeling of immersion they get from interpreting a clue in the game world, as their character.  They also lose the feeling of accomplishment from solving those little puzzles.  That's a big deal!

When Not to use Chains of Inference

Using good clues takes more time - especially if the player has to investigate further.  If the mystery the clue hints at is not very important, make the clues more obvious or just give them all the info.

If you need to hurry for session pacing purposes, cut the inference down.

If you want to establish a faster pace for the action in general, say, because you're approaching the adventure climax, suddenly a lot of little mysteries become unimportant, and you can drop them.

Email ThisBlogThis!Share to TwitterShare to FacebookShare to Pinterest
Labels: GM, How To