Urban fantasy became popular in the 1980s and 1990s, spawning its own host of tabletop RPGs.  One trope of urban fantasy is the "trade for your magic" bargain wherein regular people (and sometimes wizards) trade some part of themselves for magical powers.  RPGs like Don't Rest Your Head, Ron Edwards' Sorcerer and Unknown Armies do a good job with Faustian bargains.  The very best RPG for goblin deals is Changeling: the Lost, called Goblin Markets, but you can port the trope into any fantasy RPG - maybe even into some sci-fi RPGs.  (Though there's an RPG currently in development called Asylum that's entirely about these sorts of bargains)

A goblin market is an instant trove of plot hooks that could start a campaign or reboot a campaign that's struggling to find reasons for the PCs to care.

The PCs encounter a strange creature or market of strange creatures who offer to sell them fantastic, impossible things.  The sellers might be the devil, spirits, faeries, goblins, aliens, Mi-Go, demons, mysterious angels, djinn, an AI system, or gods.  If you're running a Planescape D&D game, you should probably introduce this trope at least once.  It could be a single mysterious tempter or a community or structure full of eerie deal-makers, or even an actual market (like in Changeling).

Nothing for sale is entirely straightforward, but all of them seem useful and maybe even life-changing.  Some may seem like curses, except when you think about them, they would be very useful.  They sell magic items, magic powers, magic properties, and fates.  Here's a sample menu of things on offer: 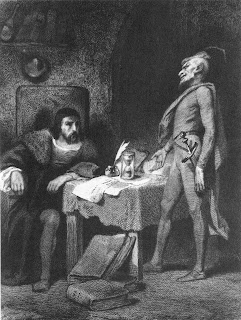 The price for these blessings is never money.  The creatures that you trade with wind up asking bizarre, intangible prices.  The bargain you make with them is magical and binding.  These costs come in two categories:  Geasa and pieces of your identity.  Geasa are compulsions or magically-enforced agreements.  Usually the blessing-seller names their price.  But sometimes the shoppers can make counter-offers or even offer some part of themselves or some promise as payment.  Here are some example costs:
Some of these prices are heavier than others.  That's OK.  None of them can really be measured against one another anyway.

The GM trick with Goblin Bargains is this:
The plot that a goblin market can create is immense.  Here are some examples:
Alternatives to the goblin market can change the relationship between the deal-maker and the PCs.  The GM can start the PCs with a need for something impossible, then present the deal-maker as their salvation.  The table can agree to a game about people who start off with good intentions but wind up doing very bad things as a result of their Faustian bargains.

The reason the "goblin market" works to excite players about your game is that they can make a deal to get things they care about, to achieve goals they care about.  In return, they pay a cost that motivates them to avoid the drawbacks of their bargain, or even to try to get out of it.  That's fuel for many, many sessions of play.