OK, DMs, what are your chances of beating the PCs?


Today's post is about making toys, and the joy the toy-maker feels reflected back when his products are enjoyed.  As a GM, especially a D&D Dungeon Master, your job is to make toys for the players to play with.  They're also toys for you to play with, of course.  And part of your fun is tuning the challenge level so that the players have a thrilling time.  Some DMs take this too far, and get very adversarial, acting as "killer" DMs.  Those DMs need more help than I'm giving here.  I'm mostly talking to every DM who's built a cool encounter just to have the players come up with a creative way around it, or to have the PCs stomp the monsters to dust before they could pull off their awesome, slow-build bomb attack.  I'm talking to every DM who complains that his PCs have it too easy, or who feels like he has too hard a time really challenging the party. 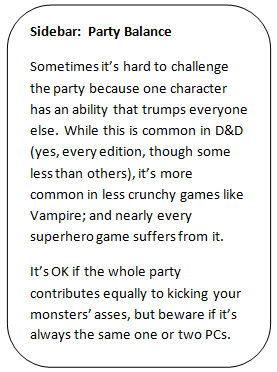 To illustrate the uniqueness of your role as a DM, I've posed the question, "What are your chances of beating the PCs?"

To answer the question, I want to talk about a "combat heavy" 4e game I'm playing in.  The DM uses encounters harder than the basic "-1, 0, 0, 0, +1, +1, +1, Boss" spread.  We've had 66 combats and we're halfway through 11th level.  Normally we'd have had to win 80-100 to get to this level.  He's not a "killer DM" by any stretch.  Overall, our experience as long time veteran D&D players, with optimized characters we've been playing for years?  This campaign has some really tough battles in it.

That's what the DM is going for, of course.  So it's good he's doing what he intended.  He's making us feel like we're getting through by the skin of our teeth sometimes.
So what are this DM's actual chances of beating us PCs?  1.5%

In all 66 battles, we've had a lot of PCs drop or even fail a death save.  It happens about every three or four encounters -- remember this DM makes it hard.  And once -- just once -- we had to retreat.  This was a forced retreat, not a plot event.  We were defeated by an encounter we could have won.

The truth of the matter is our characters have almost never been in much danger.  But the game makes us feel that way.  We're smart.  We read the optimization boards.  We memorize the Monster Manuals. Yet every other battle, we're on the edge of our seats.  Harder fights take a lot longer, of course - more rounds and more cautious players thinking through every move making every round take longer.  Because of that, we feel like this particular campaign is all about combat -- which the DM in this case is going for (normally he's very light on combat).  Not every campaign needs to feel that way.

You don't want "we might all die here" fights to be the norm.  Even our hardcore DM limits the Level+2 or higher fights to an occasional instance.  Otherwise, he knows, we'd grow far too cautious to feel like we could take risks.  We would analyze every square of movement, spend ten minutes placing area bursts, and agonize over the use of a daily.  Who wants that?

In sum, this is a combat-heavy game, meaning the combat is harder, so it takes longer and fills a greater proportion of our table time.  There are fewer easy fights, and we're more cautious as players.  And still, we have won 98.5% of the encounters we've had.

Takeaway:  You can make the fights harder.  Harder fights take longer.  Longer fights take up a greater proportion of your game time, and combat wariness takes up a larger part of the players' attention and time.  So if you want harder fights, overall, you're going to have a more combat-focused game.  And the PCs are still going to win 98.5% of the time!

For my own players, knowing that the fight around the corner could be an on-level fight as easily as a harder one keeps them going.  They're confident when it comes to kicking down a door with just one or two healing surges left and no Dailies.  They're comfortable walking into a spooky room and picking up the mysterious orb on the altar.  They don't need to take five minutes to figure out their turn, because it's not the kind of game where that's required.  The story they're in doesn't punish boldness; It rewards it.

Note that easier fights don't have to be throwaways.  Every encounter should have some reason for being in your story.

They're confident I'm here to give them a story about badass heroes.  When they win a tough fight, I make sure to cheer along with them.  That's the reward I'm talking about:  "Oh man, that minotaur almost had you, but you focused fire at just the right time.  Good tacics!"

I made a toy, they played with it, they had fun.

When I come out from behind the DM screen to roll a monster's attack against the Knight with three HP left, I start a cheering section.  "OK," I say, "I have to roll a 12 to hit you.  The gnoll growls, 'Die, dwarf!' and swings..."  Meanwhile, they start chanting "Whiff!  Whiff!  Whiff!"  When that die comes up a six, there's jubilation.  Naturally, I stroke my beard as if to say "Next time, Gadget.  Next time!" Inside, they know I'm thrilled because they're happy and engaged.  That's the point.  And if I had dropped that knight?  "'Awroooo!' the gnoll howls, 'We feast on dwarf tonight!'"  (Of course I do cheesy voices.  Don't you?)  That really gets 'em going!

So far, they've never had to retreat from a fight, but I keep them on their toes.  I've given them fights where they started talking about running away -- fights where the majority of the party is bleeding out on the dungeon floor and it's up to the cowardly warlock to pull their asses out of the fire.  It's only a matter of time.  They're only level 7.  I don't want to defeat them more than 1.5% of the time.  That's not the story I'm telling.

Takeaway:  When things get tough, ham it up.  Build the excitement.  Make it fun to win or lose.

The DM is just one more player at the table, and, when it all comes down to brass tacks, the DM's fun is just as important as the other players'.  But don't fool yourself into thinking like a player.  A player is disappointed if his cool thing whiffs.  But he's invested months into the character, whose best thing just whiffed.  He only gets to try the cool thing once each fight, or even once a "day."  He only gets one turn per combat round.  What a downer.

You're the DM.  You've got, like, five monsters.  That's a lot of cool things.  You get five times as many turns as any one of the players.  You can miss 4 of the 5 cool things and still be about on par with any one of them.  Nobody would play D&D if the DM had 50% of the fun and the other five players only got 10% each. 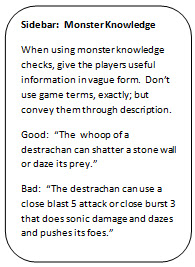 Sometimes, though, there's one cool thing I really want to see happen.  If my monster doesn't pull it off, it's disappointing.  But I use this trick:  If a monster can pull off something cool, I telegraph it long beforehand.  I give the PCs monster knowledge checks and warn them of the horrible danger (vampires can control your mind!), or describe the monster getting ready for it.  "The drow assassin glowers at the wizard, pulls out a two-foot-long dart dripping venom, and says 'This one's for you, Tiefling.'"

That way, when the PCs kill that assassin before she can murder the wizard, they say "Oh thank Corellon we killed her before she could throw that poison dart."  It's a win-win:  If I pull off the poison dart, it's a scary-cool calamity.  "Wizard down!  Cleric!!!"  If they work their asses off to stop her first, it's badass-cool victory.

Even if the PCs prevented your cool thing, it still captured their imagination and gave them a thrill.

Compare this to a movie with a tense action scene where a villain draws a gun on the hero, and they spend five minutes wrestling for control of the gun before the hero kicks it away and roundhouse kicks him into unconsciousness.  The gun never went off, but its presence dominated the scene in a far more exciting way than if it had because of the threat it posed.

If something is going to be awesome for them, it's going to be a defeat for you.  You're going to be defeated 65 times for every time you defeat them.  I guarantee you won't feel good about it when it happens, too.  I've killed PCs in other games, and I can tell you:  You get self conscious.  (Did I use that power right?  Is this because of my house rules?  Did I miss something?)

Takeaway:  Think of all your monsters as one character.  If most of them fail to be interesting, but one does something cool, then you're at least on par with any individual PC.

Takeaway:  Forewarn the PCs about monster special abilities so that when PCs foil them, it's fun.  The threat of a cool ability could be more fun than the ability itself.

Here's a youtube talk by a guy making the same point as me.
Posted by Run a Game at 9:09 AM