I've mostly talked about tabletop gaming here.  I've been part of and written/run a good deal of adventure style LARP.  That's the sort where the PCs go on adventures, instead of fight each other to see who's in charge.  I'm not experienced enough at it to claim mastery, but I want to offer some very basic insights.


The most common alternative to adventure style LARP is what I call "Elysium Style" (E.S.) LARP.  I named it after the setting in Vampire: the Masquerade where all the politics happen.  E.S. is essentially player vs. player gaming, where the players conspire against one another in order to move a social objective in their direction, what I call "the football."  There tends to be one football -- who's in charge -- but you can add other social agendas if you're smart about it (and you should).  That said, let's talk about the very basic qualities Adventure style LARP.


When the infernal forces of Satan are threatening the end of the world, it's natural to prioritize dealing with that over petty crap like "who gets to be in charge."  A guy who helped you save the world is a good guy, especially if a moment's hesitation on his part could have put you in the grave.  This brotherhood forged in battle is stronger than any political alliance where you're not sure if your "friend" is just using you.  And there's a cognitive dissonance that makes it mutual:  "I could have let him get killed by that werewolf, but I didn't."

Worse, often the danger or opportunity presented by adventure scenes far outstrips the danger of political inaction or opportunity of political scheming.  By going on adventure scenes in Vampire you collect boons, influence, the attention of NPCs, status (for your glory), get authorized to diablerize bad guys, and sometimes get cool equipment.  If you stay at Elysium and scheme for power, the most you get is status and city position, which, unless you use it to get you onto more adventures, is useless.  It's a terminal achievement.

This isn't bad, if it's intentional.  In fact, it can be great.  Adventure style is a very effective LARP style, even for Vampire games.  But you have to use it intentionally.  If you throw adventure scenes into your E.S. game, you should only do it to drive a wedge between factions or put a football in play (more on E.S. games in a later post).


Let's imagine the oh-so-common "raid on the sabbat safehouse" scene done poorly.  The GM takes a eight players into the corner and basically runs a tabletop game standing up.  The system sucks, so it grinds in combat.  An hour later, they're done, and they discover all the other seven players sitting around making dick and fart jokes or playing Angry Birds.  If you ran a D&D game with an exploration scene and a battle, it would take an hour to an hour or two.  Why do Vampire GMs think their side tabletop scenes will go any faster?

Now let's imagine this done well.  The GM taps the other seven players to cast the scene for him.  The eight adventurers have to go down the block to the Starbucks and wait until he's ready.  He hands out character sheets, opens his costume box, and lets them put on stuff to look different from their regular characters.  Then he takes three of them into the alley, tells them to read their sheets and prepare to repel invaders and try to warn their packmates inside.  Then he takes the other four and positions them inside the game site building.  He takes some black cloth and electric candles out of his prop box and dresses a set like a sabbat den, and then places a few clue props around the room he had made in preparation for the scene, so that the PCs would have a lead toward the next steps on the storyline.  Then he goes to the adventurers and starts the scene...

There are a lot of ways to get cast for a scene.  The way I mentioned above is the most crude -- tap the players not on the scene.  But you have to take them all or have a narrator give the remainder their own cool scene.  And players feel it's unfair if they get cast a lot and don't go on as many adventures.  An alternative is to let players sort into never cast, sometimes cast, and always cast, with the best cast roles going to the always cast players, and tangible rewards going to the sometimes cast players (reduced game fee, bonus XP, etc.).  Alternatively, you can start a game and organize it so that all players have a minimum number of hours of cast commitment, which they agree to when they join the game.  And there are so many other ideas!

You can also see space could be an issue as well.  That scene required a single room and alley; but to run two adventure scenes or an adventure and NPC scene at the same time, you need two distinct rooms.  More players dramatically expands the space required.  Luckily more players is more money.


Let's face it, adventures are a lot more straightforward, and you, the GM, control all the hooks and plots.  You don't have to manipulate your players into character conflict.  E.S. takes a lot of finesse.  You need to know the players pretty well, or get to know them, so you can keep them in conflict.

In an E.S. game you have to keep the footballs in play.  You don't want someone carrying one to the end zone and sitting on it with a line of all-star defenders blocking for him. And you don't want the ball to go out of bounds and disappear, leaving the players wandering around waiting for the whistle.

What I mean is, you have to keep driving wedges between the players and creating situations where they have no choice but to advance their position or fall back.  You can't let them entrench and you can't let them forget what they care about.  Sometimes you'll even lie to them about each other.

You also need multiple footballs and multiple fields.  It's the difference between Checkers and Chinese Checkers.  If the only football is "who's prince" then you've got just one axis of competition, and it resolves to a few competitors and their allies.  A lot of players may not even care about it because they didn't make prince-material characters.  You need a football for every kind of story you want to tell, with (at least) two end zones for players to advance toward.  And you need to make sure the players know what your footballs are, and make sure they make characters that care about at least one of them; and have opinions on the rest. 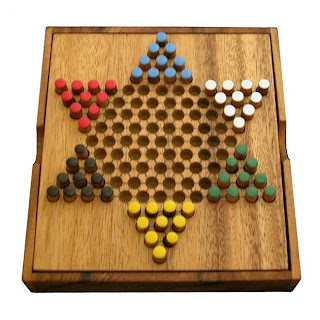 Finally, an Adventure Style game can be run with any mix of players as long as there are enough.  In an E.S. game, your game is shot if half of one faction doesn't show up.  The football (opposing factions in this case) isn't even in play.  In an Adventure Style game, as long as you get approximately the right number of players, they can have any characters and it almost doesn't matter (unless you prepared plot hooks for a specific character and for some reason didn't get him to RSVP!).


On the other hand, E.S. games often take care of themselves.  The clues, stats of the antagonists, and people to play them?  That's all done by the players, in that they're each others' antagonists.    You don't need as much costuming because the same players always play the same characters and the players costume themselves.  You don't need to write challenges and adventure scenes or run combats with NPCs or wrangle cast.

Adventure style requires you to fill your game time with adventure, and pretty quickly the players come to depend on it.  You can run a sub-game of rivalry or "who's in charge" in an adventure style LARP. but it's not going to be the "A" plot of the night.  It'll be a neat subtext that gives your game flavor.

Adventure Style GMs have done all kinds of math about how much plot you need per player/hour of game.  I'm no expert on it, and I've often failed at it.  But I'm one of the few people I know who's run Friday night Adventure style games, so I'll give my two cents on what I think the ideal is (an ideal that I never reached, but mostly out of lack of awareness and competence, not because it's hard to do).