In our continuing digression into game theory, let me propose an alternative to GNS theory for player motivations.  This one is directly applicable to running a game.  GMs, ask yourselves a question:  Why do your players play your game?


The 9th episode of Extra Credits, the industry wonk show produced by Penny Arcade TV, describes a theory article by Hunicke, LeBlanc and Zubek, MDA: A Formal Approach to Game Design and Game Research.  The episode is here, http://www.youtube.com/watch?v=uepAJ-rqJKA and the article is here http://www.cs.northwestern.edu/~hunicke/MDA.pdf

Go watch it, and then come back.

Good.  I want to take the core concept and play around with it.  Clearly players experience your game from the aesthetic direction first.  GMs, I believe, experience the game from the dynamics, which are defined as "the run-time behavior of the mechanics acting on player inputs and each others' outputs over time."

After all, GMs can control the mechanics of the game, but usually they do not create or change them; and they do not experience the players' evoked emotional response.  GMs, as players, have their own emotional experience of their game, of course; but that's another story and another blog post. 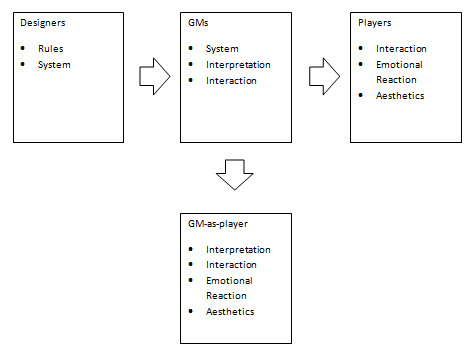 The original MDA article explains that aesthetics are the "desirable emotional responses evoked in the player, when she interacts with the game system."  I'd include "and GM" for our pencil-and-dice RPG variant on this theory.

The article also lists 8 aesthetics: Sensation (sense pleasure), Fellowship (game as social framework), Fantasy (make-believe), Discovery, Narrative (story), Expression (self-discovery), Challenge, and Submission (relaxation and pastime).  Now, for LARPs and tabletop RPGs, some of these aren't really that applicable.  Sensation is applicable only to LARP, and Submission is not likely to be a core aesthetic any of these games provides.

The table below further develops these 9 ideas by mixing in some GNS creative agendas: 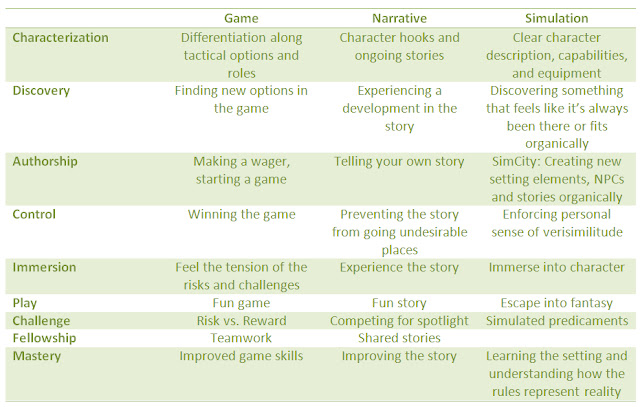 This has all been to help GMs better describe what it is they and their players like in their games, so they can better focus on what works.  Like the PATV episode said, this kind of thinking helps players communicate about what they like best in a clear and thoughtful way.  That table has 9x3 or 27 different aesthetics across creative agendas, though I know I'm missing one (see Reinhart's essay on symmetry!).

You can also predict how I GM from my list of aesthetics:  I like to run a well prepared game where I have balanced, challenging game scenarios mixed with a world that I try to make appear fully developed, using detailed storylines that hook directly into the characters if possible.