When the statistic called Charisma was invented for the first time, a new layer was added to Dungeons and Dragons, and with it, to nearly all roleplaying games from that point forward:  a system for adjudicating social interaction with character statistics.

What social systems give us is a way to divorce player social skills from character social skills and, in some systems, by setting different levels to various social skills, somewhat define a character's personality by how well he takes to and performs various social tasks.  They also allow us to stand at a remove from repugnant or uncomfortable social situations, make a die-roll-based tactical game out of social situations, and create situations where the GM can point to the dice to announce a failed or successful social interaction regardless of how poorly he defended an NPC's position or how poorly a player defended his own.

I think this list covers all the various uses of social scenes.  I do not think social skills themselves contribute in a positive way to characterization of player characters or NPCs, other than the incentive to play aggressive if your character is skilled at social aggression.  But they can give the GM power and add layers to the game. 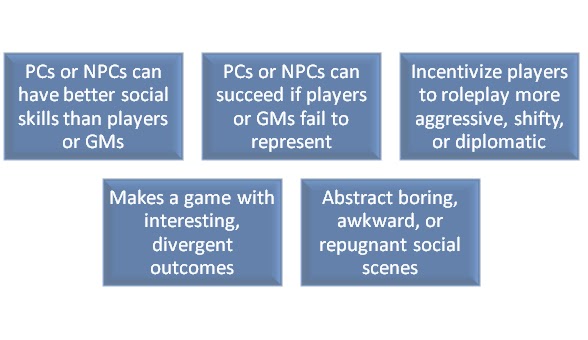 A good GM knows how to use every tool he is given.  I want to go over each of these uses of the tool in turn.  Some are more obvious to even a new GM; while others are missed by veterans.

Characters can have Better Social Skills than their Players

This is one of the obvious uses of a social system.  It is problematic, though.  GMs tend to allow a good social interaction to turn a bad die roll into a good one, but not vice versa.  "Don't let a die roll tell you how to behave" is only worth so much when the system specifically calls for a die roll to tell you how the NPC behaves!  Moreover, GMs tend to call for die rolls only when the social interaction does not result in a decisive conclusion.  Suave players can steer a conversation with an NPC to a decisive conclusion and avoid the die roll altogether.  Awkward characters have no such recourse.  In point-buy systems, social skills are a tax on socially awkward players or players who don't have all that close a relationship with the GM (since personal familiarity can stand in for social grace).

A less cynical view is that social skills are a valuable game system recourse for awkward players and players who aren't as close friends with the GM.  Without them, the players would have long odds of playing a charismatic character.

A warning:  If you intend to have a lot of social scenes in the game, make sure all your players have characters that will be fun to play in them.  Most games are moving in this direction, even good old D&D:  The latest editions of D&D, 4th edition and the playtest materials for D&D Next include social skill options for every character class.

Characters can Succeed if Players Fail

This is a corollary of the previous use of social system.  That is, a player may not have the energy or social skills to persuade the GM, in character; but the player can turn to a die roll to represent a heroic, energetic plea from his character, and succeed despite a lackluster performance.  But in order for it to work as written, it has to work both ways:  If a PC and NPC are arguing before a judge, and the NPC wins the die roll despite the player giving an Oscar-worthy performance, the GM has to side with the NPC, according to the rules.

Of course, I don't advocate using the rules as written.  I don't care if the rules bias against the NPCs and for the PCs.  Let the suave player's honeyed words give his character a bonus, even if his character is supposed to be poor in oratory.  In the moment, it will be galling to the entire table if such a good performance -- even if it's easy for that particular player to put on -- were to run afoul of the game system.  This is the "rule of cool":  Go with the cool thing, even if the rules say otherwise.  Still, it's not exactly fair, and you should keep aware of that.

Normally, I'm a fan of transparency, but behavioral economics has its place in roleplaying games.  Let me explain.  A player may tend toward soft diplomacy; but he wants to get out of his usual conciliatory shell and play an aggressive brutish thug.  Without a social system, he would have to swim upstream to act so aggressive, so contrary to his typical demeanor.  But with a social system, he can make his character phenomenal at Intimidation, and pathetic at Empathy and Diplomacy.  Now, all of a sudden, he can act intimidating, and, even if he doesn't do a good job of it, he can employ a die roll to enforce his character's brutish ways (though, as I explained above, maybe not as well as a naturally aggressive player could do).  Furthermore, he's incentivized to be aggressive, because that's where his character's skills are.

In a role-playing game, typically players and the GM act out interactions between PCs and with the NPCs.  But there are scenes that may be awkward for players, not typically experienced stage actors, to act out.  For instance, a player may have a stormy love affair with an NPC, which drives a lot of the character's plot hooks.  The GM frequently has to roleplay romantic scenes with the player and can't keep a straight face of it, so instead, they roleplay the parts where there are plot hooks, and abstract the flirtation and wooing to die rolls.  On a more "serious" note, scenes of torture, intimidation, bullying, and shouting matches may not be appropriate to roleplay out live; so an "out of character" narration of the scene can be accompanied by die rolls to assess the result.  Finally, some social scenes are dull, such as a whole court trial; or interviewing dozens of potential witnesses to a crime, or gathering rumors all day in a medieval marketplace.  It's far more fun to abstract those to die rolls.

Like all other kinds of scenes, you can employ...
Some games (4th edition D&D, Dresden Files RPG) have rules for building scenes around a series of skill tests.  You can use these rules to layer a game on top of a social scene.  In that case, the resource costs and strategic options are built into the system; though you can probably add to them if you like.  Also, the system opportunities for spotlight time are already written in, though you should still look for ways to tie in character-specific challenges.  You still need to determine the interesting outcomes for success or failure (and in some games, you get more granularity -- varying degrees of success and failure).