They added quite a lot of flavor. 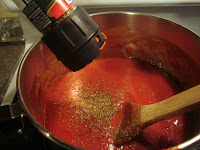 This isn't necessarily a bad thing.  Flavor adds creative flair, and in this case it fixes the "prestige class" problem 3.5ed had.  Now you start getting your "prestige class" flavor at level 1.  That makes every class special.  While that wasn't necessary for Druids or Paladins before, it was important for the boring Fighter, and to some degree to Rangers and Rogues and, I suppose, even Paladins.  Pretty much all the martial fighting classes needed a little more than "flank the enemy and full attack" and Pathfinder gave it to them, more or less.

But all that flavor also restricts players in character creation. By adding all kinds of flavor to every class, Pathfinder, like many games, (see Fading Suns, Legend of the Five Rings, Werewolf: the Apocalypse, etc.) mixes gameplay statistics and flavor elements together in the character classes presented.  If you want to play ___, you have to be ___.  If you want to play a Wendigo you have to be Savage.  If you want to play someone from Vodacce, you have to be Sexist and Scheming.  You can invert these tropes and play an effete, cultured Wendigo in Werewolf: the Apocalypse; but the character class then forces you to be an exception to the rule.  There's no escaping it -- you are either defined by the class or defined by your deviance from its norm.  Either way, taking the class inherits the norm.

In games that have a predefined setting, into which the player characters are thrust, this can be a good thing.  In Vampire: the Masquerade, you get a clan, and with that comes a lot of political story hooks.  Those hooks tie into the central story of most Vampire games.  That's the point.  If you're playing Vampire, getting that flavor with your character is great.

But there are two directions for approaching character creation in an RPG.

One direction is the inverted pyramid:  Start with the broad idea, then add details.  Dream up the entire character, then try to find stats that obey the character creation rules and can achieve with game mechanics what the idea in your head is supposed to be able to achieve.  At its most extreme, this strategy still starts with the premise and setting of the game, so if the flavor of the setting is "baked in" to the character classes, it can really help with this strategy.

The other direction is the organic "coming together" approach.  Start by looking through the character options and finding ones that you think will be fun, then putting them together into a whole.  As that happens, you design a character concept that explains all of them.  At its most extreme, this strategy doesn't connect with the premise or setting until the last step.  That doesn't mean the organic approach is weak on premise or setting, though, because using it, you may find yourself spending a lot of time in that last step.

In reality, I think everyone uses a process somewhere in between, looking at what's possible, seeing several stats that look like they would be fun, then dreaming up (or being inspired by) a character concept based on a few stats.  With games like 7th Sea and Werewolf, the setting and character options are all combined.  Whether you're a fighter or mage in Werewolf (Ahroun or Theurge) gives you social obligations and rights.  Whether you're a peacenik or violent killer (Child of Gaia or Get of Fenris) gives you access to different fighter or mage options.  So the setting and stats are integrated.

In Pathfinder, they aren't.  This is interesting to me.  It's very interesting.  Pathfinder is a D&D game.  It's in the D&D fantasy sub-genre, so in a way it comes with a lot of setting and premise information.  It will be a game about lowly beginnings, growing in power and influence, searching through remote, isolated locations to find treasure and uncover secrets, and use magical and martial might in a medieval fantasy world.  Consider that there's almost as much implied premise there as in a World of Darkness game.  But while you have a lot of premise, you don't have a lot of setting connection.  All the classes' built-in flavor connects to premise but not setting.  Like many editions of D&D, Pathfinder has a "built in" setting, but most of the classes don't connect directly to it; their flavor is flavor, not hooks.

And here's where getting a player's perspective is interesting for a DM.

I'm pretty nimble-minded.  So faced with the fact that my stats (character class) will pack my character with flavor, I intuitively used an organic approach to character creation.  Reflecting on that, I realize that I could have used either approach but as I like to say, "water flows downhill"; so I seem to have gone with the character creation approach that fit the system.

This leads to a theory of what encourages different approaches to character creation.  Reinhart and other game designers might want to take note:


Let Me Tell You About My Character

New to Pathfinder, but experienced at 3.x edition D&D, I knew that a primary spellcaster class will not disappoint me; so I elected to play a Witch.  Witch comes with massive amounts of flavor, but it's just flavor.  It ends there.  I have to do the work to make it mine, but it starts out as Paizo's.

It's not like Vampire, where the character classes come with setting hooks instead of just colorful flavor:  "The Ventrue antedelluvian supposedly slew the Brujah antediluvian and sacked the clan's utopia at Carthage, creating a lasting animosity between the two clans.  Ventrue have secret clan titles, a specific process of Accounting called agoge that requires them to complete a massive project, and all Ventrue are expected to seek power within kindred society.  In support of that, they work in concert as a board of directors, sharing resources with one another to appear more powerful and connected as individuals."  There's a pile of plot, NPCs, and challenges built right into every Ventrue PC!

Thankfully, my DM has made Witches persecuted, so I get a nice setting hook there; but that was his work, not Pathfinder's.  My character is going to have made a pact with a mysterious patron with power to control Time itself.  As part of this pact, his patron sent him a familiar, an animal that only he and his patron can talk to, acting as a conduit to the patron and teaching me secret magics.  That's a lot of cool detail!  But that's Paizo's detail (the Pathfinder publishing company) not mine.  Even though, combined with a Dusk Elf heritage, that's enough content to define most science fiction protagonists, I still feel the need to make the character mine.  It's going to be a lot of work to fill in my own personalizing details within the strong, "spicy" flavor imparted by the Witch class and Dusk Elf race.  The part that's a little annoying to me is that there aren't strong hooks there.  I can put work into turning Paizo's character details into my character's hooks, but I'm working off their content, and that restricts my options.  I can work with that, but that's how it is.

Another Perspective Within the Same Context

Another player in this Pathfinder campaign, B., decided to play an assassin.  B. is using an inverted pyramid approach, and it's turning out to be very difficult (though probably rewarding) to him.  An Assassin (capital A) is, technically, a Prestige Class in the game, and when player S. heard B. wanted to play an assassin, he assumed he was going to play an Assassin -- meaning some other class compatible with the Prestige Class like Rogue.  Capital-A Assassin is a class full of stealth, poison and dirty fighting abilities.

But an assassin (lower class a) is a murderer who kills for money or ideology.  In the real world, and probably in B.'s mind, assassins include stealthy guerrilla soldiers, deep cover operatives, religious fanatics, ideological extremists, and guns for hire.  They use poison, bombs, gas, knives, silenced pistols, contrived gadgets, scoped rifles, traps, ambushes, and even animals.  In Pathfinder, add all kinds of magic to that list, of course.  Their strategies range from disguise and ingratiation to suicide bombs.  Sometimes their goal is to kill and get away, as in the case of soldiers or spies.  Sometimes their goal is to kill at all costs, such as with nationalist fanatics.

The breadth of lower-case-a assassins could include just about any character class.  Only, B. has a specific idea in mind and apparently it's not Rogue/Assassin.  There's a dishonorable murderer build for just about every character class; but there are also many times more builds that are honorable or healers or protectors...  So I predict it will take a lot of work for B. to make the stats for the character he has in mind.  Some strange combination of classes will probably match what he wants his character to be capable of, and actually be as good at doing it as his imagination implies.

This isn't an "edition war" post.  I don't mean to judge Pathfinder as bad for having all of this added color in its character classes.  4th edition D&D does it too, as I demonstrated with an example, above.  I just think that GMs need to be aware that the game that they choose to run will influence how players decide to build their characters.

When you pitch your game, consider that if the game imparts flavor on characters like Pathfinder or 4e D&D does, you will need to help players who get stuck at various places as a result.  Here are some places I can and have seen it happen so far: