What I'm Up To

I suppose I should take a moment and explain what games I'm currently running and playing.  That way, if you're following my blog, you can use that for some perspective.  We all come with biases, after all. 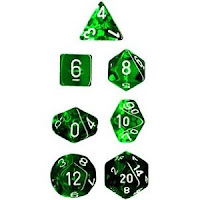 Right now, I'm running an every-other-week Tuesday night D&D game.  The setting is home-made, and the system is d20v3.5.  Or 3.5 ed or however people call it.  I've been running it for half a decade.  The players started at first level and have made it to fifteenth.

The campaign is actually the second campaign in a planned game.  I designed a world centuries after an apocalypse that killed off the good god, full of sinister collaborators who pretend to be a structured church to a handful of holy gods, yet only the upper echelon, now mostly slain, knew that it was secretly serving the leaders of the extraplanar demons who overthrew the only source of good in the world.

But the first campaign was pitched quite differently.  I originally pitched a two-part campaign starting in a mining town in the mountains on the frontier of a barbaric tundra.  It was a Wild West story of rival gangs, greedy out-of-town financial interests, and honest folk suffering from all the strife and corruption.  In the end, the heroes decided to ally with one of the gangs and one of the out of town interests to overthrow the most evil out of town bad guys.  It was all up to them, of course.  The second half was also pitched to them at the start of the first campaign.  The second campaign would travel the world overthrowing the corrupt church and eventually raiding heaven itself to slay the demons posing as gods.

At this point, the heroes are in heaven, and it's hard going.  Designing encounters for 15th level 3.5ed characters is hard.  And concluding a D&D campaign is also tough.  There are a lot of loose ends, and the actual conclusion seems pretty predictable and not climactic enough.  Honestly, there have been several bad-ass climaxes in the game.  At the end of the first campaign, they battled a dragon by luring it into a mine, sealing themselves inside with it, and duking it out until the whole thing collapsed into an ancient ruin, nearly killing them all.  In the middle of the second campaign, a character's sister went insane and accidentally birthed a demigod of evil by trying to use potent healing magic provided by the demons to raise the dead good god.  They conquered two cities before coming to heaven.  One in a siege, the other doubly conquered -- they killed its leader and came back to clean up the mess of vampires in its wake.  Now they're killing gods PLURAL.  To keep perspective, I have to put myself in the players' shoes.

Running this campaign for years has made me never want to run another 3.5 game again.  Two factors make planning it a chore:

First, encounter design is a pain in the ass because building human enemies that actually work takes hours.  I've resorted to just making stuff up now.  A high level cleric has, let's just say 200 hit points.  Screw it, why not?  And he can cast Harm.  And the save DC is... 27?  Sure.  Let's go with that.  Sounds good.  Compared to picking 6 feats that synergize with a build objective, optimizing for save or die touch attacks, reading up on what long-term buffs he should keep up, etc. I'd rather just wing it and if my players say "wow,. he has a lot of hit points for a high level cleric" I'll just shrug and say "evil demonic pacts."

Second, encounter design is a pain in the ass because, like all non-4e versions of the game, the wizard and cleric get spells that can circumvent any challenge I throw at the party.  I have to plan around Wind Walk, Dimension Door, Rope Trick, Magic Circle vs. Evil, Holy Word, Stone Shape, Mass Fly, Greater Invisibility, Mass Invisibility, etc...  It's tough!  It's tough because planning around all that takes a lot of work; but planning around just enough of that to create fun challenges without railroading the PCs is extremely difficult.  Ultimately, I err on the side of letting them get away with it.  It's just not worth it to me to plan for all their capabilities.  But because they're able to circumvent my challenges, it motivates me to not put too much effort into them unless I'm going to bother with a Wind Walk/Dim Door/MC vs. Evil/Rope Trick/Stone Shape proof dungeon with a plot conceit that makes them unable to stop and rest...

But I do it anyway, for the love of the players and the story.


For a more casual, less epic D&D game, I started a long-format (12 hour sessions) 4e Essentials game that runs every other month or so.  I'm running the Essentials module line, and I'm up to Madness at Gardmore Abbey.  That module promises to be awesome.  After Madness, I'll have to fill in my own content in order to tie up all the loose ends of the plot, but I intend to loosely base it on the Vor Rukoth setting supplement.  The idea of a great ruin that was just discovered, with several factions of explorers, researchers and treasure hunters intrigues me, and lets me bring all the loose ends to one place.

With a busy job and a baby at home, a module campaign is very rewarding.  The level of effort required to produce quality games is low, so the cost-benefit ratio is very favorable.


This is also a long-format, occasional game.  Unlike the Essentials campaign, this game is all home-made plot, and I'm using a strategy culled from a Forge forum thread on writing real mystery games.  I may post about how to do that, but in sum here's how it works (I need to explain this to show why I can't run this game very often):

In traditional mystery RPG scenarios, the heroes get a case, find some clues in the first scene, and follow those clues to more scenes, which, in turn, give them more clues.  This process is called a clue chase, and it can be linear (scene 1 - clue 1 - scene 2 - clue 2 - scene 3 - clue 3 - climax scene - resolution) or semi-linear (clues 1a-3a - scenes 1-3 in any order - clues 1b-3b which, when put together lead to the climax scene - resolution).  In any case, it's not actual mystery solving.  There is an element of procedure to it, and it is investigation, but it's not mystery solving.  The benefit of it is that the GM can plan each scene since the clues will always lead to the designated scenes.  There are other ways to run RPG mysteries.  I've done "the players' second theory is the correct one" -- a gestalt style mystery -- and it worked very well for telling a story that much resembles a sleuth novel, but I think the players felt cheated.  Then there's the "howtocatchem" game where whodunit has been solved, but not how to catch him.  That's handled by ad lib GMing and lots of prep (and you'll see below that that's part of what I've been doing).  But I digress.

In what the Forge poster called "abductive reasoning" (a term I have not heard before or since) the mystery proceeds as follows:  The protagonists are hooked into solving the crime.  They get a set of initial clues.  They generate a working theory called "the case."  They test their case against the facts and refine it.  Then it moves to the howtocatchem phase.  Simple?  No.  The initial "clues" are not contrived matchbooks with phone numbers written in that lead directly to another scene and another clue (though you can certainly use that technique within this method).  Instead the GM has to design a complicated caper and work out literally all the details of the original crime and what the criminal has done since.  The difference is that instead of a discrete set of clues that lead to scenes and a solution, the GM gets to know all the non-player characters and their actions so well that there are potentially infinite clues.  When running against the clock -- and all serious criminal investigations are, because criminals don't stop trying to cover their tracks just because the cops found the body -- real detectives use this method to get ahead of the "pounding the pavement" standard procedures.  It's more real trying to come up with a case that fits the evidence and test it, but for the GM, it's hard.  And that's why I don't run this game that often.


I'll be brief here, because this is a blog called RUN a game, not PLAY a game.  Still, this is perspective that will help my readers (so arrogant sounding to write, "my readers"!  Oh well).

Like a lot of GMs and people addicted to GMing, I have several RPG scenarios and even campaigns in the works, including LARPs.  But I'm not going to write about them all.  Perhaps later this week I'll post about my white whales: Reckoning and The End of Time.

Email ThisBlogThis!Share to TwitterShare to FacebookShare to Pinterest
Labels: About Me, DnD, GM, World of Darkness